Sales in August declined 5% to $196,084,532 from July’s $207,302,877, up 21% from last August’s $161,768,266.  This is a normal month to month fluctuation indicating a somewhat healthier market without the distortion caused by the expiration of last year’s tax credit. For the 1st time in two years the 12 month moving average line for total dollar sales is tilted slightly upward.

Absorption rate for New and Used homes last month remained near record highs of 11 and 14 months respectively. Last month presents a more accurate picture due to late closings and listings that are not yet included in the current month statistics. (See the chart (Sect C p.1).

New homes at  8 months supply this month and a reduced sales pace, is one month worse than last year at this time (Sect E p.3). The situation remains distressed. New home supply seems to be accumulating. Strangely, under $100,000 New homes were at 8 months last month, and 11 this month. (Sect C p.1 and Sect E p.3.) New home inventories in higher price ranges (above $400,000), remain excessive at over a year.

Absorption for Used homes in August 2011 shows 10,831 Used Active listings as a lower number than 12,674 last year, (Sect E p.3) which is 13 months of supply, a bit better than 14 months last year (Sect E p.3). The listing activity is somewhat less than last year as is sales activity….

Birmingham area Average Days on Market for New houses was 199 compared to last month at 222. The Used homes DOM was 149 in August, compared with 145 last month (Sect A p.18). NOTE: DOM for Used Homes indicates that well priced homes are moving in less than 6 months. The high months of inventory indicates that sellers, including bank owners, are still holding out for higher prices, which is unlikely to be successful. Newsflash: If your home is not selling, reduce the price, this advice applies particularly since we are entering the slower sales season of the year.

Average sales price for Sold New homes increased to $241,233 from $238,345 last month (Sect A p2). Average sales prices for Sold Used homes decreased to $159,100 from $159,439 last month (Sect A p2). The twelve month moving average price line for Used homes has been quite steady since mid 2009 and is now showing an uptrend. Average Home prices, new and used have stabilized and show an upward trend (Sect A p2). This is mostly a reflection in the change of “mix” with more larger homes being sold, but the price of any specific home remains under pressure.

From our friends at Alabama Title:
I’m A bit late with this sorry!

Not so encouraging was the increase in foreclosures over the last four months. Foreclosure filings for the period numbered 1,346, up from 1,277 (or 5 percent) during the same period last year. 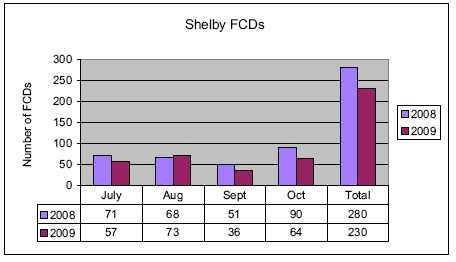 Realtrac, sees notices of default being processed by the banks, only a small percentage of which actually result in foreclosure. So the headlines about big increases in foreclosures, may or may not presage a real increase in actual foreclosures. In the case of the Realtors who have also been reporting on foreclosures, they only see those homes that are being sold by Realtors, that have been designated as foreclosures, in fact these listings are way after the fact and may also reflect repeat listings for homes that don’t sell after they have been foreclosed…

So this report from Alabama Title Company reflects actual foreclosure deeds filed in the county. Interestingly they paint a considerably brighter picture, which I certainly hope to be a more accurate reflection of what is really happening.

Despite recent reports that foreclosures are surging in the state, foreclosures in Jefferson and Shelby counties, as measured by the actual number of foreclosure deeds filed in those Probate offices, continue to decline, by 13 percent for the year in Jefferson County and by five percent in Shelby County. In the mortgage market, Jefferson County saw a marked increase in filings, but the number remained relatively weak compared with 2008. 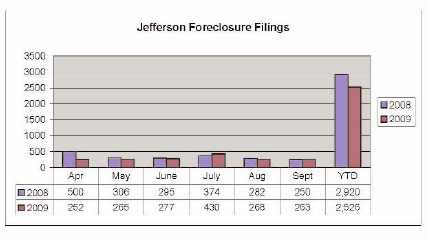 Foreclosure filings in the Jefferson County Probate Office fell to 263 in September from 268 in August. Year-to-date, foreclosures in Jefferson County are down 13 percent compared with the same period in 2008.

Foreclosures declined in Shelby County from 73 in August to 36 in September. Overall, foreclosures year-todate are down nearly five percent in that county.

I am pleased to present what I believe to be the best local foreclosure data. Unlike the national “foreclosure filing” data which represents delinquent loans which may or may not result in an actual foreclosure, that is most often reported, this is real foreclosure data, filed at the courthouse, from actual transactions reported on a consistent basis and timely basis. We were pleased to help Alabama Title with presentation ideas for this data.

Despite a mini-surge in foreclosures in Jefferson County in early August, the real news for the month is the continued decline of mortgage activity. Despite a short boom in refinances during the first quarter of the year, mortgage filings fell to their lowest level since December 2008, when credit markets faltered after a series of large corporate failures.
Mortgage filings typically decrease in the Fall reflecting the seasonality of the housing market. However, the steep decline over last year’s numbers – absent a decrease in interest rates such as occurred last December – does not bode well for the mortgage market.

via: The Alabama Title Company Mortgage and Foreclosure Report Sept 24, 2009

The single biggest question on most our readers’ minds is: Where is the housing market headed? I have  attempted to put thoughts to paper only to be overtaken by the constantly shifting market. One of my favorite fellow blog sites has come out with a very compete analysis. I’ve included the 1st part here so click over to Calculated Risk and take a read, you will be way better informed for doing so. It will also help to understand some of the stats I produce and how to interpret them, particularly the tension between the new and used housing sectors and their relationship.

Housing Activity Forecast
by CalculatedRisk on 4/19/2009 02:17:00 PM
Reuters is quoting Freddie Mac chief economist Frank Nothaft as saying that he believes U.S. housing sales are near a bottom. Nothaft also said about one-third of all sales were foreclosure resales.
I disagree with Nothaft’s forecast.
My view is:
# New home sales are at or near a bottom.
# Existing home sales will fall further.
Since there are far more existing home sales than new home sales, I expect that total sales activity will decline further.

This report Via the Birmingham Business Journal from The MLS, Our report will be out this next Monday, our figures will differ slightly as we give the agents more time to enter transactions. Interesting note on Forclosure sales. The Full BAR report is on their site.

I was curious about what properties Collins group owned: WSJ article here on Foreclosure: (I can’t determine which ones GE has Foreclosed on). Here is some info from the Birmingham Business Journal, a quick Google search turned up the Collins group: their web site from happier times last entry in June ’07, from a blog maintained by their president:
From their web site:

As we approach the midpoint of the year, investors begin to reflect on what happened during “the first half” — where we stand, and where we’re going.

If I had to encapsulate what Collins’ 2007 has consisted of thus far, it would have to be “digesting”.

The Collins Group had an extremely active 2006: over $400 million in new assets including our $132-million deal which was one of the largest multifamily deals in Alabama (or at least one the largest Capmark’s Chad Hagwood said he had seen that year) and our year end $155-million buy which established us as one of Alabama’s largest landlords. Deals like these take time to digest and to absorb into a diverse portfolio.

In addition, some of our earlier deals are coming out of lockouts. Collins Group hopes to refinance as much as $500-million in floating rate debt in 2007 so we can poise ourselves for another round of aggressive expansion. We remain bullish on the Southeast, we still see the markets in the region as being solid long-term investment areas. Our relationships with our preferred lenders — industry leaders like GE Capital, Wachovia, Capmark Financial Group, among others — continue to strengthen and improve.

And if markets like Atlanta are expected to outpace the nation in population growth until 2020, we might not be going anywhere for a while.

The Collins Group on del.icio.us

I have begun to aggregate some of our press and news using the social bookmarking site, del.icio.us, in order to give our readers some of an idea as to what the press is saying about the Collins Group, and where we have been active in the recent past with regard to our acquisition and expansion activity.

Collins’ Alabama portfolio currently stands at 5,000 units, with a gross value in excess of $300 million.

These are outstanding communities in the strongest markets in the area. Collins owns properties literally next door and across the street from these communities which have been shown themselves to be prime and pristine assets.

The portfolio marks Collins’ ninth Alabama acquisition. “The Birmingham market is seeing strong occupancies and, with a moratorium on new additions, this is only expected to remain the case,” remarked Finance and Acquisition VP Jay Herman.

Collins’ regional expansion plans are not expected to slow down. By the end of this year, Collins’ Alabama portfolio will total some 8,000 units with a gross value of over $500 million. Collins has several acquisitions pending for the third and fourth quarters of 2006. Collins has found numerous opportunities in Alabama in line with our philosophy of seeking assets with intrinsic value in its acquisitions.

The properties – Renaissance at Galleria, Park at Galleria, Place at Galleria, Overlook at Homewood, Magnolia Park at Homewood, and Wisteria Park – have benefited from significant improvements since upgrades began in 2002. Over $17 million has gone into improving the properties, with two properties – Overlook at Homewood and Magnolia Park – receiving full exterior and interior overhauls completed in winter 2006. The properties feature some of the most luxurious amenities in the Birmingham area.
Collins has partnered with The Lightstone Group in other ventures, including the 672-unit highrise Marbury Plaza in Washington, DC.

Lightstone sets the pace for aggressive growth while giving attention to the details of building value. Lightstone brings a lot of things to the table – their strong reputation in the marketplace, their extensive financial experience is a perfect synergy with Collins’ attention to detail on the management side.

“Collins is pleased with its new alliance with CapMark in its financial ventures. Collins is certain CapMark was the right choice,” added Herman.

Collins and CapMark are already working closely on pending acquisitions.