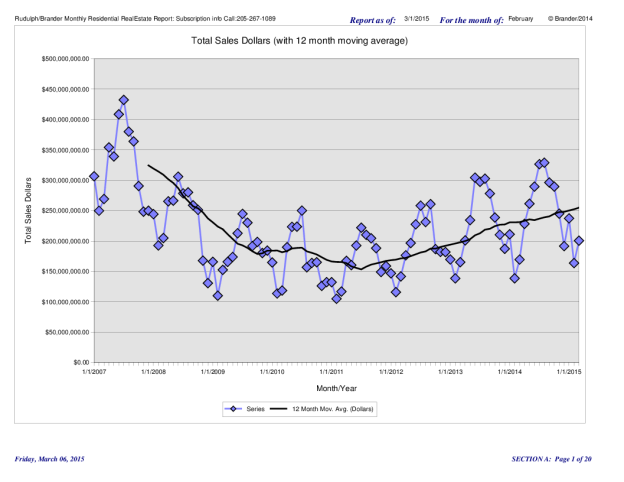 Dollar sales in February experienced an expected seasonal improvement of 22% to $200,563,499 from January’s $163,769,334, up by 18% over last February’s of $169,452,699. The increase over last year in the last two months indicates the possibility for a strong spring season. The 12 month moving average line for total dollar sales is continuing to show a very steady upward trend indicating consistent growth.

Keeping in mind the ACRE numbers are slightly different from those we report. With Acre, we released our 2015 forecast which can be seen here. We expect the Birmingham area to be 6% above 2014 levels. So this month’s unit increase of 6% is in line with the projection.  Based on what I see I expect pretty substantial market gains. I also expect to see a healthy increase in new construction, the beginnings of which we can see from the year over year gains in permits below.

Housing permits were up in Jefferson County to 101 in January from 93 in December, which is up considerably from 65 last year. Shelby County went from 41 to 39 in January, up from 5 last year. It seems that builders are anticipating a strong spring market and I think they are right. In addition, we are seeing a more significant number of multi-family construction units (which we do not formally track or report) in most markets.

Absorption rate for New homes is at 6.8 months supply this month, which is up slightly from 6.2 months last year at this time. Last month though, shows 8 months of supply (Sect E p.3). The New homes for the most part have normal inventory levels in the 1-7 month range depending on area and price range. (Sect C p.1 and Sect E p.3.)

Absorption for Used homes in February shows 7 months, one month better than the 8 months last year. Used Active listings at 8,398 are up slightly from last month at 8,295 and lower than the 8,666 last year (Sect E p.3). Market performance is highly area specific, so check the individual area charts. For instance, Mountain Brook has about four months of inventory except in the over $900,000 category, which has 7 months of inventory (36 homes), with six sold in that price range last month . The average days on market for that category is 131. There are a number of MLS areas showing similarly low levels of inventory, including Homewood and Centerpoint.