Note: The 19% increase in dollar sales vs 9% increase in unit sales is mostly due to higher priced properties picking up  in activity.

Unit sales were up 7% to 1,085 in December from 1,017 in November, a increase of 68. This is up 11% from December 2012 at 974.This number will increase as late sales are reported. Our ABRE/ACRE Projections for 2013 are 1,065 sales for December. For December, actual sales for the month were 2% worse than projections and 1% higher than year to date. Please see here for a summary of the projections http://goo.gl/nytW8 and the spreadsheet with details and month by month projections http://goo.gl/GEYWa (see the tabs on the bottom). 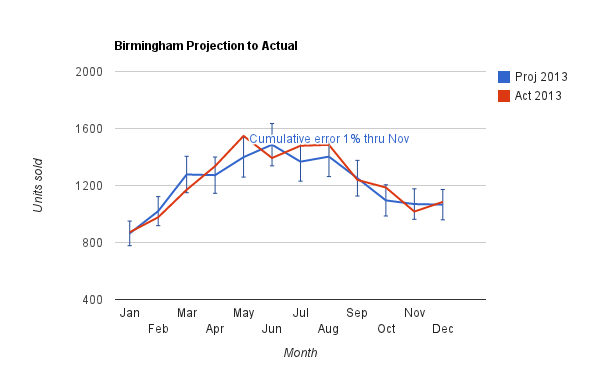 This month total inventory is 8% lower at 8,581 vs. last month at 9,870 and 9,224 last year. The drop in the current month is caused by month-end expirations which will come back on the market. We are seeing a seasonal downtick in inventory and which is slightly lower than prior years, although New home inventories are beginning to look a bit high. Active New listings decreased to 784 in December from 1,069 in November, a decline of 285 units (Sect E p.3).  Housing permits were down in Jefferson County to 53 in November ( the lowest level in quite some time) from 122 in October. Shelby County went from 28 to 24 in November.

Absorption for Used homes in December shows 7 months,one month better than 8 months last year. Used Active listings at 7,797 are lower than the 8,404 last year (Sect E p.3). The market performance is highly area specific, so check the individual area charts. For instance, Mountain Brook has about three months of inventory except in the over $900,000 category, which has 7 months of inventory (26 homes) with nine sold in that price range last month . The average days on market for that category is 157. Birmingham area Average Days on Market for New houses is 213, same as last month.